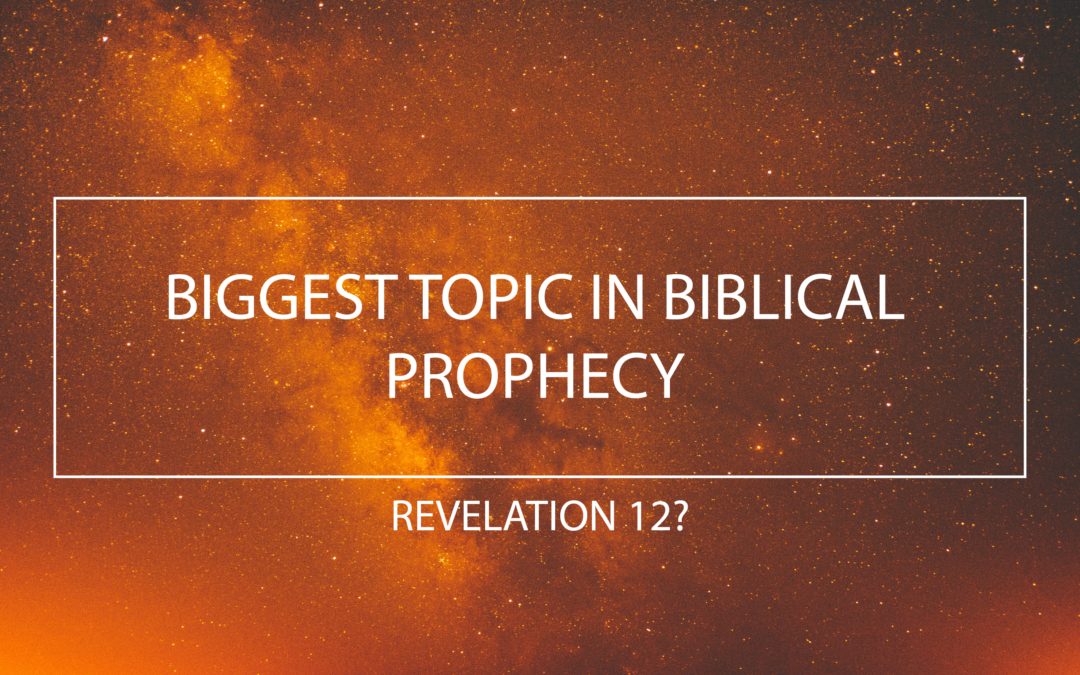 And a great sign appeared in heaven: a woman clothed with the sun, and the moon under her feet, and on her head a crown of twelve stars; and she was with child; and she cried out, being in labor and in pain to give birth.

It is amazing to me what is increasingly passing today as Bible prophecy teaching. In most cases, it has nothing to do with the Bible, and when they use the Bible it is too often twisted and turned into something the Bible really does not say. Someone said recently to me that too many “prophecy ministries” are like going to a UFO conference, mostly lacking in the actual teaching of the Bible but filled with speculative theories. Every couple of months some new “breakthrough” is put forth, after many, many hours of study . . . of course. Years ago it was that the rapture was going to take place on Israel’s Feast Day—the Feast of Trumpets. Then came the Psalm 83 war, the Harbinger, followed by the Shemitah, and the Blood Moons. On and on it goes, whipping many prophecy followers into a state of frenzy, yet these speculations are always wrong and nothing significant ever happens. The advocates present themselves as the smartest guy in the room and are supremely confident in their speculations.

The temptation to mix contemporary events with an effort to explain Bible prophecy is nothing new. It has been going on throughout the history of Christendom. One instance that has always captured my imagination is the early medieval tradition relating to the Last Roman Emperor. There are a number of different forms of this prophetic story, which was widespread and popular during the Middle Ages. It is often easier to recognize the comingling of myth and Bible prophecy when an example is over a thousand years old.

The belief taught that in the last days twin brothers would arise,[1] one would be the most godly man to arise in history other than Christ Himself and he would provide a righteous and godly rule of Rome. At the end of a period of time, the first twin would take his crown to Golgotha in Jerusalem where Christ was crucified and cast it at the foot of the cross and he would ascend to heaven. This ruler would is labeled as “The Last Roman Emperor.” Then the second twin would rule over Rome and would become the anti-Christ. The second twin would implement such an ungodly rule so as to oppress the people of Rome like never before. The second ruler would be killed at the second coming of Christ.[2] There is a mixing of folklore with some biblical elements in this tradition. It appears to me we are seeing a similar dynamic today.

The latest speculative outburst is Scott Clarke who has spent too much time looking at the sky rather than his Bible.[3] Clarke teaches that the signs presented in Revelation 12 match-up with astronomical alignments and will reach an apex on September 23, 2017. Clarke has made an impressive number of YouTube videos with in-depth explanations and insights about this approaching prophetic date (according to Clarke), which contains observations of the signs in the heavens and how we are on the verge of

fulfilling Revelation 12. Clarke teaches the man-child being caught up to heaven is the rapture of the Church and not a reference to Jesus. Because some constellation in the heavens is about to move into a certain alignment on September 23rd, that is when the supposed prophecy of Revelation 12 will be fulfilled and this means the rapture of the Church could/will take place on that date. Of course, there are many more details involved in his argument, but I must now start on the critique.

First, Clarke approaches issues with many faulty presuppositions. Faulty presuppositions render invalid virtually everything he says about his theory. If you start out in the wrong direction then the further you walk will only lead you further from the truth. A huge mistake Clarke is apparently not aware of is the fact that the sign John saw in this vision in A.D. 95 will not be fulfilled in the heavens but upon the earth during the seven-year tribulation. Revelation 12 is a biblical chapter explaining why the world will hate and persecute Israel during the tribulation. Ultimately it is due to the conflict between the seed of the woman and the seed of the serpent as originally prophesied in Genesis 3:15. “Let every student of this great chapter realize right here that the understanding of this chapter is the key to the understanding of many things,” declares commentator Herman Hoyt. “It is the key to correct interpretation of the Book of Revelation, of the Bible, and of history. In this chapter will be found the story of the conflict of the ages.”[4]

In this passage, as well as throughout the Book of Revelation, symbols represent literal, historical persons, places or things. John MacArthur says, “The literal approach to interpreting Scripture allows for normal use of symbolic language, but understands that it points to a literal reality.”[5] For example, we use symbols for athletic teams. The Bears beat the Lions, 35–21. It is understood that both teams had humans playing for their squads, but their team mascots are bears and lions. The same approach is used in many prophetic sections of both the Old and New Testaments where symbols are used of people and kingdoms. Many prophetic symbols are used in Daniel 2 and 7. In Daniel 7 a lion represents Babylon (verse 4), a bear represents Medo-Persia (verse 5), a leopard represents Greece (verse 6), and an unidentified beast represents Rome (verses 7–8).

In the first book of the Bible, Genesis, we see that there are over a dozen dreams or visions that contain the use of symbols that project prophetic predictions. It is also significant that every dream or vision is fulfilled in the lifetime of the individual who sees the dream or vision. Therefore, since the biblical text interprets every one of these dreams or visions, we are able to see how the Bible uses prophetic symbols that provide a framework for interpreting prophetic symbolism throughout the rest of Scripture. Never in the Bible are symbols fulfilled by a repetition of the symbol seen in the original prophetic symbol or vision. Yet this is the totally unbiblical approach Clarke uses in his approach to Revelation 12.

For example, Joseph in Genesis 41 interprets Pharaoh’s two symbolic laden dreams. The seven fat cows represented seven prosperous years agriculturally for Egypt. The seven lean and ugly cows that ate the seven fat cows were symbolic of seven years of famine. The dream was repeated using seven prosperous ears of corn followed by seven withered and thin ears of corn. Joseph said, “Behold, seven years of great abundance are coming in all the land of Egypt, and after them seven years of famine will come, and all the abundance will be forgotten in the land of Egypt; and the famine will ravage the land” (Gen. 41:29–30). The symbols in the prophecies represented historical people, places, and things in the immediate future. To apply Clarke’s errant approach would mean the actual symbols would reoccur in history again, just like the

symbolic vision seen by John in the first century. However, just as in the dreams and visions in Genesis and throughout the Bible, the symbols represent future historical entities.

There are a whole host of other errors that could be cited concerning Clarke’s presentation, but it is impossible to arrive at right thinking when one begins the process with errant presuppositions. In fact, it guarantees that one will draw a wrong conclusion, unless one is irrational in the outworking of their thought. In addition to a totally wrong approach to interpreting Revelation 12, Clarke should know there is no basis upon which to date the rapture. Even though Clarke is pre-trib, his approach to the dating of the rapture is functionally post-trib. By that I mean he has shifted the focus of church age believers from waiting “for His Son from heaven” (1 Thess. 1:10) to looking for signs.

People who attempt to figure out a date for the rapture are looking for signs that do not exist, which is why they have to do things like Clarke has done in order to make a case for the impossible. We are specifically prohibited by Scripture to attempt setting a date for the second coming at the end of the tribulation: “But of that day and hour no one knows, not even the angels of heaven, nor the Son, but the Father alone” (Matt. 24:36: Mark 13:32 is an exact parallel). The Second Coming has hundreds of signs or events preceding Christ’s arrival to earth and we are told no one will know when it is going to occur. This means the rapture, which is absolutely signless, is even more impossible to predict.

The point of the New Testament Epistles relating to the rapture is that we are always to be waiting for Jesus at all times. If you are looking for signs leading up to an event, then you are focused on those signs and not on our Lord Himself. Clarke’s theories and the many others like him are a distraction from the focus upon Christ and His command in the Great Commission to preach the gospel throughout all the world and make disciples (Mark 16:15; Matt. 28:19) because Jesus tells us in the context of the Great Commission: “it is not for you to know times and epochs which the Father has fixed by His own authority, . . . and you shall be My witnesses both in Jerusalem, and in all Judea and Samaria, and even to the remotest part of the earth” (Acts 1:7–8). Maranatha!