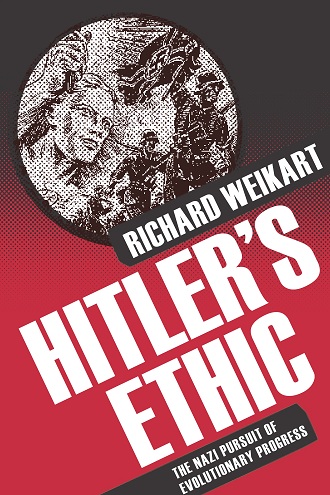 – How evolutionary or Darwinian was Hitler’s Social Darwinism?  Such a question has now been answered by Dr. Richard Weikart’s (Discovery Institute Fellow of Science and Culture and scholarly inspiration behind Ben Stein’s documentary “Expelled”) excellent book entitled, “Hitler’s Ethic: The Nazi Pursuit of Evolutionary Progress (Macmillan Palgrave, 2009).  Even though the answer to this question should have been easily settled long ago, too many scholars and academics committed to Darwinian evolution have obfuscated the clear historical facts on this disturbing truth.  In crucial ways, many Nazis, including the Fuhrer himself, held more radical views on evolution than other western versions of the same precisely because they were most willing to put the theory into political practice.

While such a course of action necessarily politicized evolutionary theory to suit the National Socialist agenda, such a nuance demonstrates how seriously Hitler took Darwinism, i.e., he enthusiastically tried to socialize it as a political goal.  National Socialism was, in fact, an evolutionary socialism based on nature, race, and eugenics – not upon humanism and class warfare as it was for other socialists and Marxists.  This distinction, however, does not make Nazism any less socialist.  National Socialism was just socialist on different grounds.

Hitler’s political ethic was rooted in the natural world like a Darwinian tree that not only placed the Aryans on top of the racist totem pole, but also emphasized the struggle of nature that invariably ran roughshod over the weak.  Weikart points out, “Hitler’s ethic was essentially an evolutionary ethic that exalted biological progress above all other moral considerations.  He believed that humans were subject to immutable evolutionary laws, and nature dictated what was morally proper.  Humans must adapt to and even model themselves after the laws of nature.  Most important among these biological laws was the struggle for existence, as Hitler repeatedly emphasized throughout his career.”

Hitler’s favorite word was “kampf,” which means “struggle” or “battle.”  His favorite phrases were, “struggle for existence,” and, “eternal struggle,” or even “inescapable struggle.”  When Hitler used the word “kampf,” for all practical purposes he meant, “evolution.”  As such, though Hitler did not propagate a strict scientific definition of evolution, there can be no doubt that his use of the word “struggle” was viewed through evolutionary lenses.

Weikart acknowledges there is no evidence that the Fuhrer ever read Darwin, but Social Darwinism was strongly propagated by Darwin’s German scientific interpreter and best-selling author, Ernst Haeckel (1834-1919), whose evolutionary works had deeply permeated Germany’s academic and cultural psyche for more than 75 years.  Not only did Haeckel believe the struggle for existence lead to evolutionary human progress, “he also believed that Darwinism had demolished anthropocentrism, the view that humans are special or sacred.”  Haeckel believed politics was applied biology and that strong state controlled eugenic action was necessary to safeguard the racial composition of society.  Haeckel was also the first scientist to view the Jewish ‘problem’ as a biological one.  Hitler heartily agreed.

Hitler took the word “struggle” so seriously that he converted the Darwinian notion of “survival of the fittest” into a cultic philosophical worldview that scientifically justified racism.  Yet, this should not be surprising since racial evolutionary science and eugenics was very popular in scientific circles in those days.

Many scholars are quick to accuse Hitler of believing in the immutability of the species by focusing on a few of his comments.  However, such statements by the Fuhrer have far more to do with the fact that he believed evolutionary development over time led to a greater separation of the species so that crossover became increasingly more difficult, if not impossible.

Moreover, Hitler stressed that in nature the unquenchable instincts of self-preservation and reproduction conflicted with available living space or lebensraum.  As such, Hitler concluded, “In the limitation of this living space lies the compulsion for the struggle of life, and the struggle of life, in turn, contains the precondition for evolution.”

From such a standpoint, the rest of Hitler’s Nazi policies and practices can easily be explained as Weikart does so eloquently throughout the book – everything from his eugenic schemes to euthanize the weak and sickly, to the collectivist desire of increasing the German population, to the genetic wish of  improving the Aryan gene pool through ‘scientific’ control of reproduction and racial mixing, to socializing the economy from a biological point of view, and finally to the justification of racial extermination and genocide on the Eastern Front during the heights of World War II.

Since the Aryans had evolved the most, Hitler believed they were the strongest, cleanest, most artistic, and most hard working race on the planet.  Hitler was so attached to the doctrine of evolution that he even believed all morality was biologically determined.  Armed with such crackpot biology, Hitler also concluded that Jewish selfishness, i.e., their so-called greed, mercantilism and materialism, not to mention their alleged proclivity to avoid manual work, were all rooted in weak hereditary traits that were unnatural and contrary to the evolutionary laws of nature.

Furthermore, though careful to be somewhat religiously correct in public, Hitler despised Christianity.  In his mind, since Christianity was pacifist and tried to minister to the weak, he wholeheartedly believed Judeo-Christian values had greatly enfeebled the very Aryan body and blood of Europe.  In October of 1941, just as the Wehrmacht was poised just outside the gates of Moscow, Hitler said, “By means of the struggle, the elites are continually renewed.  The law of selection justifies this incessant struggle, by allowing the survival of the fittest. Christianity is a rebellion against natural law, a protest against nature. Taken to its logical extreme, Christianity would mean the systematic cultivation of human failure.”  Closely connected, Hitler believed St. Paul the apostle made Judaism universal.

Hitler especially denigrated Christianity’s anti-natural disposition that exalted man over nature.  Hitler presumed this doctrine undergirded an out of control industrial capitalism on the one hand, but had also infected the humanistic political goals of the socialists and Marxists on the other hand by propounding the equality of all men.  Such ‘liberal’ chaos was fast degenerating all of Germania into adversarial camps that were artificially dividing the Aryan race from itself.  What was needed to correct this suicidal path was a fascist return to nature and her racist Darwinian laws so that Aryan Europe could recover.

Such was the evolutionary mindset of the Fuhrer before he launched Operation Barbarossa that plunged Eastern Europe into a socialist slaughterhouse of near apocalyptic proportions, claiming some 50 million lives.  Although Darwin himself would have been aghast at how Hitler used his theory in such a barbaric way thanks to his otherwise Victorian morality, it still cannot be denied that many facets of his evolutionary theory are proto-Nazi.

Hitler and the Nazis reversed the English Victorian worldview which held that Judeo-Christian civilization was orderly but nature was both lawless and chaotic.  While Darwin would have extolled the Victorian life as an imperfect by-product of evolution, Hitler and the Nazis claimed exactly the opposite.  The National Socialists viewed themselves to be far more authentic than their English counterpart.  They were far more interested in putting the evolutionary worldview into political practice rather than entertain it as a mere scientific theory of natural origins.  If evolution is really true, then it needs to be applied both politically and socially.