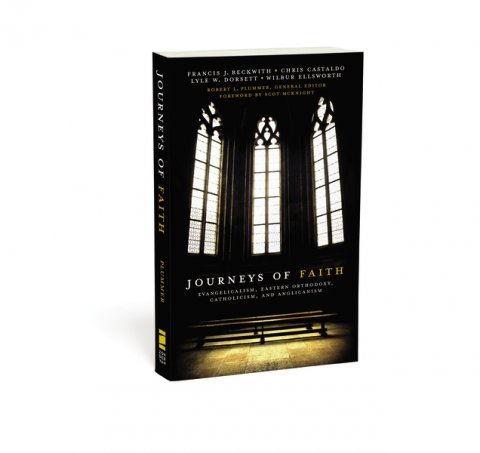 – Journeys of Faith: Evangelicalism, Eastern Orthodoxy, Catholicism, and Anglicanism (Zondervan, 256 pages, March 2012) perfectly showcases the spiritual chaos of the modern church.  Edited by Dr. Robert Plummer of Southern Baptist Theological Seminary, the book is an anthology of various theologians and clergymen who have crossed the aisle with regard to their respective religious heritage.  The spiritual journeys described in this book often go beyond Protestant denominational lines and speak of cross-confessional departures into other church pastures.

Wilbur Ellsworth journeyed from Evangelicalism to Eastern Orthodoxy.  Dr. Francis Beckwith, though reared a Catholic, later became a strong Evangelical, only to return back to mother church.  Dr. Lyle Dorsett, raised a Lutheran, became an Evangelical, but later transitioned to Anglicanism.  Chris Castaldo, who left Catholicism for Evangelicalism, is the only writer whose changeover is best explained as a conversion experience.  The other men were all on a long drawn out “journey” that finally found solace in various forms sacramentalism as understood by Orthodoxy, Catholicism, and Anglicanism.   Their journeys are then critiqued by Dr. Craig Blaising, Dr. Gregg Allison, Dr. Brad Gregory, and Dr. Robert Peterson respectively.  While the book is an excellent read and brings up to date the great theological battles of the past, it leaves the reader with a sense of despair because it sheds too much light on how convoluted the church has become today, especially with regard to Protestant evangelicalism’s contemporary relationship to biblical authority.

While Dr. Scot McKnight prefaces the book by acknowledging that the paper thin theology of the modern Evangelical church has become a spiritual liability, Robert Plummer wonders out loud in the conclusion whether or not this book will further erode confidence in Evangelicalism.  Three out of the four writers left Evangelicalism for Eastern Orthodoxy, Catholicism and Anglicanism looking for “something more” beyond the contemporary worship scene of the present day Evangelical Church.  Moving away from the shallow, seeker friendly churches of modern Evangelicalism, their “journeys” brought them back to the ancient creeds, the traditional religious mystery of liturgy together with its emphasis upon sacerdotalism – all largely explained and undergirded by patristic and medieval theology.

What some of these writers fail to appreciate is that the modern evangelical emphasis upon singing banal repetitious songs for 45 minutes at a time is, in reality, just a contemporary form of liturgy.  The evangelicals have just jazzed up ancient liturgy with contemporary sounds.  The primary difference between ancient medieval liturgy and contemporary liturgy lies in the fact that modern evangelical worship borders on bald entertainment, but tends toward mysticism all the same.  As far as the medieval pictures and images are concerned, in the emerging evangelical church they have been replaced with a full scale multi-media program that keeps the physical senses captivated as long as possible.

In other words, contemporary evangelical worship has also been looking for “something more” than what has been deemed a traditionally “dry” Protestant approach that emphasized preaching and the singing of hymns.  Furthermore, the Orthodox-Catholic emphasis upon icons, pictures, and images was all largely done as an early form of what is called the seeker friendly church today.  They wanted to gather into the flock pagans who had grown up in idolatry and who would therefore have a very difficult time appreciating the nakedness of faith that the New Testament strongly emphasizes.  In truth, with the new push on seeker friendly church services, the modern evangelical church is doing much the same as their forebears did.

What liturgy always fails to do, whether traditional or contemporary, is to wed strong didactic content with spiritual singing that the book of Psalms does so well.  Even the apostle Paul commanded us to “let the word of Christ dwell richly within you, with all wisdom teaching and admonishing one another with psalms and hymns and spiritual songs, singing with thankfulness in your hearts to God (Colossians 3:16).”  Most liturgy and contemporary worship songs fails St. Paul’s litmus test.  Paul demanded “rich” spiritual content based on the “word” that could teach and admonish the congregations as they sang to the Lord.  Evangelicals appear to be losing men because they have become so shallow in their modern approach to worship.

Chris Castaldo acutely points out that the Catholic concept of biblical revelation and ecclesiastical authority has everything to do with a conflated theological view of the Incarnation.  The Catholic Church believes that Romanism and its ecclesiastical institutional hierarchy IS ITSELF the literal body of Christ on the earth.  While Protestants hold that the church universal is the body of Christ on the earth from a spiritual point of view, it does not equate or confuse its ecclesiastical organization or bureaucratic polity with the Person of Christ Himself.  As such, the Catholic Church holds that Roman Catholicism is not only a literal prolongation of the body of Christ on the earth, but it is also a continuous incarnation that develops and grows through its religious traditions in addition to the Scriptures. This is precisely how church tradition becomes equated with Scripture and vice versa, and how the bishops and pope can speak ex cathedra.

With regard to the importance of biblical authority, Orthodox and Catholic Christians do not seem to understand very well that at the close of the first century, when the apostle John wrote the book of Revelation to the spiritual hub of Christianity centered in Ephesus, five out of the seven churches were not doing very well.  Only one, the church of Philadelphia, was truly pleasing to the Lord.  In other words, the church was already corrupted by the close of the first century.  As such, to appeal to bishops and church tradition as the basis for Orthodox and Catholic authority is shaky at best.   In 3 John, the apostle John even complains of one out of control bishop in particular, Diotrephes.  Diotrephes was ignoring John’s own apostolic counsel, and even ex-communicated faithful believers out of the church for the sake of political power (3 John 9-10).  Such problems can only be sorted out by going back to the Scriptures, the only real basis for divine authority (Eph 2:20- 3:10; 2 Peter 1:16-3:2, 15-16, Jude).

Mark Musser graduated from Western Seminary in Portland, Oregon in 1994 with a Master of Divinity.  Following graduation, Mark and his family were missionaries to Belarus and Ukraine for seven years.  He is now a pastor of Grace Redeemer Bible Church in Olympia, Washington which was founded in 2004.  Mark is the author of “Wrath or Rest: Saints in the Hands of an Angry God,” and “Nazi Oaks: The Green Sacrifice of the Judeo-Christian Worldview in the Holocaust.”