A Review of Covenantal Apologetics, by K. Scott Oliphint 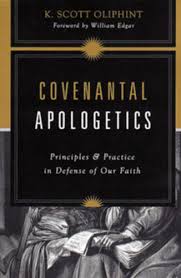 K. Scott Oliphint is Professor of Systematic Theology and Apologetics at Westminster Theological Seminary in Philadelphia.  He has written several good books of apologetics and philosophical theology; most notably his Reasons for Faith and God with Us.  He is, as far as my opinion counts, the main successor to Van Til and Bahnsen and their apologetic approach.  This new book, Covenantal Apologetics, is his introductory textbook on how to defend the Christian Faith.  But it is something else too.  It launches the author’s project of re-conceiving Van Til’s presuppositional apologetics as distinctively “covenantal” – meaning grounded within Reformed covenant theology.

I shall not say much about the success of this venture in this review, but it seems to me that even though Van Til would likely not protest, his particular apologetic stands on its own because it is clearly biblical; whereas covenant theology has slightly less going for it in that department.

Looked at simply as a book about presuppositional apologetics this is a welcome addition.  Between the customary Introduction and Conclusion there are seven informative chapters.  Although the methodological stuff is contained, as usual, in the opening chapters, the author has thought through how best to present the logic of the approach, and he brings in some useful refinements in this area; refinements which readers will appreciate.

Broadly defined, the first four chapters draw out the biblical and theological basis for this apologetic, as well as the reasoning behind the preferred title.  The fifth chapter tackles the problem of evil, in part by clarifying what it is and how ones perspective on it affects the “problem.”  Chapters six and seven address evolutionary naturalism and Islam respectively.  Each of these later chapters contains a mock interchange with an unbeliever which draw the reader more into the apologetic situation.  The brief Conclusion reminds us about the need for humble dependence on God as we give unbelievers a reason for our hope.  The volume is completed by a Bibliography and General and Scripture indices.

Oliphint defines apologetics as “the application of biblical truth to unbelief.” (29).  The first chapter deals with the pertinent details of covenant theology, which Oliphint believes undergirds his approach.  Whether that it so or not the chapter is worth reading.  I gravitated to this reminder about how we see the world:

We are to think about and live in the world according to what it really is, not according to how it might at times appear to us. (35. Cf. 96)

That is worth writing out and placing over the shaving mirror, and it shows why Van Tillian apologetics also helped spawn the biblical counseling movement.

This first chapter also includes the author’s ‘Ten [crucial] Tenets for a Covenantal Apologetic’ (47-54, and summarized on 55).  Although the word “covenantal” crops up in each tenet, I see nonecessity for its inclusion.  These ten tenets are extremely helpful and are called upon throughout the test of the book.  Along the way Oliphint is careful to deal with the notion of antithesis (33), self-deception (36, 76-77), irrationality in non-Christian worldviews (45), the peril of relying on classical formulations of God’s attributes rather than listening to the Bible (80f.),  and the matter of “burden of proof”; which is covered well (109-110).  Oliphint (contra Bahnsen) even recommends assuming it as a ploy to set out what Christianity teaches.

While writing about “God’s Unabated Revelation” he introduces Calvin’s teaching on the sensusdivinitatis or “implanted” knowledge of God, which everyone has because being made in God’s image (97-104).  Because of this truth the Bible may be used as a “faith-weapon” (cf. 37) in witnessing to unbelievers and should not be left out of the apologetic encounter.

The fourth chapter rolls out Oliphint’s helpful “Trivium of Persuasion” set out in terms of Christian character (ethos), audiencial context (pathos), and biblically rooted argumentation (logos).  This part of the book exhibits well the inner workings of a biblical apologetic.

The dialogues in the book are well done.  They increase in complexity toward the end of the book.  The first of these is found in chapter three, where the construed discussion is with a humanist over the irrationality inherent in belief in blind determinism.  One of the ways these discussions work is to show how to “encourage our opponents to make plain where they rest their own case.”  This is crucial as “The issue of authority is always primary.” (163).

The ten page dialogue with an Atheist Objector on the problem of evil does contain a heavier dose of theology than might be expected, but it illustrates how to make the objector self-aware, and also how to turn an objection to that end.

The imaginary discussion with Daniel Dennett in chapter six is used to good effect to demonstrate the way unbelievers often naively set up the Christian apologist for a fall by prescribing the rules of the game beforehand.  Oliphint has his apologist respond,

The net you that propose to use for our verbal volley is not one that I myself am able to use…what you think is rational argument is, in fact, a judgment that precludes my position…You are anxious to have the net up, as long as the net contains only those principles that you claim to be rational.  But if that is the case, then surely the game is fixed from the beginning…” (211).

As anyone knows who has engaged unbelievers (particularly atheists), they can be relied upon to assume that they are neutral and dispassionate, all evidence to the contrary.  At the end of chapter six is a cautionary word about “plausibility” which often is defined against larger considerations of worldview.

The last dialogue, with a Muslim (in ch.7), is a little more advanced than the previous ones.  The debate is structured with the help of the authoritative Islamic apology, The Theology of Unity.  The discussion is allowed to play out over twenty plus pages so that the reliance on Aristotelian logic and the internal contradictions with Islam’s doctrine of God come into view.  This is achieved without introducing the difficulties involved in a Unitarian conception of deity.

All in all, this is another valuable addition to the author’s work in apologetics.  I really do not think he makes a good case for this approach to be renamed “Covenantal Apologetics” (where ‘covenantal’ answers to covenant theology), as opposed to presuppositionalism, although I acknowledge the awkwardness of that term.

Other criticisms of the book are few and hardly deserve mention.  Apart, that is, from Oliphint’s description of God as the “Totally Other” (41, 82).  This is too close to the neo-orthodox position on the incomprehensibility of God as “wholly other”, and threatens to undo many of the best arguments in the book.  For if God is “Totally Other” then biblical revelation cannot any longer close the gap between His transcendent “otherness” and our immanence; which leaves us having to dig ourselves out of a conceptual hole of our own making.  But that is perhaps a matter for another time.  Covenantal Apologetics is full of good things.