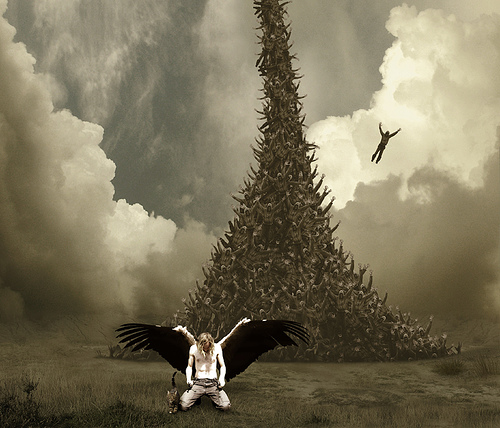 – We quickly examined, in our last newsletter, the branch of the Spiritual Warfare Movement known by some as the “power encounter” branch. These are men such as Mark Bubeck and C. Fred Dickason who believe that we must forceably confront, bind, and expel demons from the lives of some people if they are to find spiritual freedom. This time we will turn our attention to the “truth encounter” branch of the SWM. This branch is well represented by Neil Anderson who, while in general agreement with Dickason and Bubeck, believes that power encounters are not necessary, in fact may be dangerous. He teaches instead, a more clinical approach which directs the demonized to take certain steps based on truth. When those steps are taken, the demons will release their victim from bondage. We want to carefully study this aspect of the SW principally through the teachings of Anderson.

Neil Anderson is the most popular teacher of the SWM. Anderson was the chairman of the Pract Theol Dept at Talbot School of Theol of Biola Univ. He has written several books on this subject including, The Bondage Breaker; The Seduction of Our Children; Victory Over the Darkness; Released from Bondage; and Walking Through the Darkness. He also travels the country giving his “Freedom in Christ” seminars. We will deal with Anderson’s teachings as representative of the whole group.

Biblical Teachings:
Many of Dr. Anderson’s concepts are in line with the Scriptures, for which we give God praise. Anderson would be in agreement with the essential doctrines of the faith. In addition, he places special emphasis on:
— right thinking will produce right emotions.
— the greatest deterrent of mental and emotional health is a true knowledge of God.
— the believer must understand their identity in Christ.
— forgiveness is extremely important in the Christian life.

However, Anderson also teaches Christians can be demonized or demon possessed: Anderson makes the following statements: “It is my observation that no more than 15% of the evangelical Christian community is completely free from Satan’s bondage.” (Bondage p.107) “Demonic influence is not an external force in the physical realm; it is the internal manipulation of the central nervous system” (p111). “Anything bad which you cannot stop doing, or anything good which you cannot make yourself do, could be an area of demonic control” (p179).

To Anderson 85% of evangelical Christians are controlled to some degree by Satan. It would be quite an interesting search to attempt to find Scriptural support for Anderson’s assertions.

Christians can be delivered from demonization:
Fortunately for us, Anderson has discovered a means of deliverance for the demon-controlled Christian. Where did he find his program? Certainly not in Scripture — remember the Bible apparently is unfamiliar with this problem. He did not find it even in the traditions of the great saints of the past. As a matter of fact, no one in the history of the church has ever taught the methods developed by Anderson — which tells us a couple of things.First, since this program is not based upon Scripture, and since it is brand new to the church, great caution is in order. Secondly, if Anderson is correct, then most of the saints of the past, who only had God’s Word to guide them, have been hopelessly enslaved to demons — apparently without realizing it. What a sad thought!

What does Anderson teach that the believer must do in order to be free from demonization? His primary focus is to be contained within the following four concepts:

1. Understanding our Identity in Christ
Much of what Anderson teaches in this section is Biblical, however he deviates in two important areas.

a) The authority of the believer.

The argument runs like this. I am seated in the heavenlies in Christ. Christ has all power and authority. Therefore, I have Christ’s power and authority. As a result, all Christians have authority over Satan and his demons.
It should be obvious that the third premise above is not true. Anderson gives Lk 9 and 10 as proof texts. But not only are these references to the pre-Pentecostal believer (who were not in Christ), but they are specific instructions to a specific group of people for a specific act. These passages have no reference to the church.

b) Binding, loosing, commanding Satan and his demons.

Anderson admits that there are no instructions in the epistles to cast out demons because (he says) it is the responsibility of every Christian to put on on the armor of God, stand firm, and resist the devil. Scripture used as support is Mt 12:29. But it is wrong to conclude that Christ was establishing a universal principal for binding evil spirits. And by the way, who keeps letting them loose?

2. Freedom From Our Past
Anderson suggests a 3-prong approach:
a) the “integration of psychology with theology.”
b) freeing the Christian of “generational demonic bondage.”
c) forgive yourself. Nothing in all the Word of God gives us the authority to forgive ourselves.

3. Freedom from Scriptural Conflicts Caused by Demons
Demonic confrontation is the crux of Anderson’s ministry. Note three unhealthy and/or unscriptural presumptions:
a) demons (not the flesh) are the primary source of Scriptural failure for the Christian.
b) Christians can become demon possessed.
c) spiritual warfare is an offensive, rather than defensive, campaign including verbal assaults on Satan. “We must learn to bind the strong man before we will be able to rescue his prisoners” (Bondage p91).

4. Steps to Freedom in Christ

Satan will be defeated only if we confront him verbally (p.84).
Step #1 Renounce involvement with satanically inspired occultic practices. (This would include any activity that a family member may have participated in).
Step #2 Choose to live by truth rather than deception.
Step #3 Choose forgiveness rather than being bitter (this includes forgiving ourselves p.196).
Step #4 We must choose to be submissive rather than rebellious.
Step #5 Live humbly instead of proudly.
Step #6 Choose freedom rather than bondage to sin.
Step #7 Renounce the sins and curses which may have been placed on your ancestors (Bondage pp186ff, esp p.201).

The Scriptures claim to provide everything we need for salvation and sanctification (II Tim 3:16,17; II Pet 1:3). Yet, by the SW teachers’ own admission there exists no Biblical evidence that a child of God can be demonized. If that is the case, then obviously the Scripture provides no steps to freedom from demon possession. But we are now being told that Neil Anderson and C. Fred Dickason are providing for us what God’s Word never does. Where are these men getting this information? From experience — the same source that the Charismatics get their unbiblical teachings.

Not only is the SWM derived from extrabiblical sources but it contradicts much of what the NT does tell us about demons. Some examples:
1) In the epistles there are ten references to demons (mostly relating certain facts), but there are over fifty references to “the flesh” as the primary enemy of the Christian. The NT perspective is that the major area of conflict is in the arena of the flesh, not demonic influence.

2) Some are claiming that demons have names that reflect their influence. Names such as, “lust,” “murder,” “envy,” “gossip,” etc. Yet, nowhere in the Bible do we find any support for this teaching. Scripture explicitly says that these actions are a product of the flesh (e.g. Gal 5:19-21).

3) Anderson claims that when we deal with demons it is a “truth encounter,” not a “power encounter.” But in the Scripture when Jesus or the Apostles cast out demons it was always a power encounter. Never once did Jesus attempt to reason with a demonized individual. Never once did He call on them to believe the truth. He always forceably cast demons out of such people. In addition, not a single person in the Gospels ever came to Jesus for deliverance from demons. The obvious reason being that when a demon controls someone, that person has lost his ability to choose right. Yet the SW teachers claim that demonized believers are coming to them for deliverance in great droves.

4) The SW leaders do not understand the distinction between Jesus and the Apostles, and the average Christian. Jesus’ encounters with the demons were directly related to His claim to be the Messiah and His offer of the Kingdom. As for the Apostles, there are three occasions in which they cast out demons after Christ’s ascension (Acts 8:5-8; 16:16-18; 19:11-12). The ability to do this was given to verify their appointments as Apostles (Mk 16:17; II Cor 12:12). In the NT we do not find Christians casting out demons unless they were Apostles. However, even with the Apostles we do not find the casting out of demons to be a major part of their ministry. Instead, the norm for dealing with the demon-possessed was the presentation of the gospel.

5) It is interesting to realize that it is these very areas — the ones the charismatics and the SW people emphasize so heavily — that Jesus singles out as proving nothing concerning our relationship to God (Mt 7:21-23). And later Paul would teach that even satanically inspired people can produce miracles (II Thess 2:9-12).

6) The bottom line is that this method of sanctification is taught nowhere in the Bible. We surely can trust our Lord to have included a means of demonic deliverance if it had been needed.

Originally posted on Think on These Things.