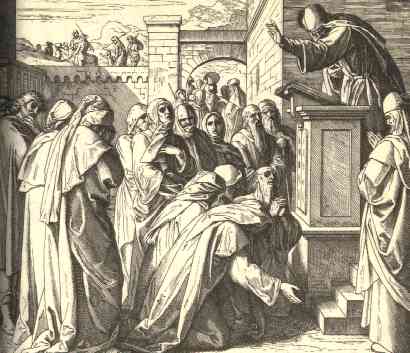 – What is the method by which we should go about teaching men the word of God? Probably the best passage illustrating the model by which we should teach men is Nehemiah 8:1-8. Under God’s providential hand and Nehemiah’s leadership the walls of Jerusalem had recently been rebuilt, despite opposition, in a mere fifty-two days (Neh 2-6:14; 6:15-16; 7:1). When the Feast of Trumpets arrived streams of people living in other cities in the Judean countryside streamed to Jerusalem (Neh 8:1-2). Upon their arrival they would have seen the new-born majesty of the city that had lain in ruins since the destruction by the Babylonians almost 150 years before. In response they asked Ezra the scribe to bring the book of the Law of Moses and read to them the word of the LORD. In a passage which lays out in detail almost every facet of synagogue worship Ezra complied by standing upon a raised wooden platform and reading from early morning until midday from the original Hebrew. Men, women and children capable of understanding stood in honor of the word of God (Neh 8:3-6). However, due to generational loss of the Hebrew language as a result of foreign intermarriages, many younger Jews could not understand the reading (Neh 13:24). To compensate several of Ezra’s trained teachers circulated throughout the audience, translating[i] from the original language into the spoken languages of the people and giving an explanation[ii] of the law (Neh 8:7-8). This is Bible exposition at its finest!

Since our audiences do not speak Hebrew and Greek we have a model here given for learning the original languages, translating into the native language of our audience and giving a clear exposition of the original authorial intent. Would that God would raise up men with the desire to receive such training and to diligently pursue the study that they may be equipped to engage in translating and giving exposition in a clear, concise manner!

[i] The Hebrew for “translating” is paras (פָּרַשׁ) and means “to make distinct, declare”[i] (Swanson, James. Dictionary of Biblical Languages with Semantic Domains : Hebrew (Old Testament). Oak Harbor: Logos Research Systems, Inc., 1997.) “to cleave,” “to expand to spread out, specially the feet in riding on horseback.” (Gesenius, Wilhelm, and Samuel Prideaux Tregelles. Gesenius’ Hebrew and Chaldee Lexicon to the Old Testament Scriptures. Bellingham, WA: Logos Bible Software, 2003.) In the Pual passive it has been defended by Hengstenberg that it should be understood as “with a translation.” (Ibid., Gesenius.) The “form of the verb in Hebrew here, mĕpōrāš, is the equivalent of the Aramaic form in Ezr 4:18, “The document you sent to me has been ‘translated’, mĕpāraš, and read before me.” (Ezr 4:6–6:18 are written in Aramaic, the rest in Hebrew.)” (Hamilton, V. P. (1999). 1833 פָּרַשׁ. (R. L. Harris, G. L. Archer Jr., & B. K. Waltke, Eds.) Theological Wordbook of the Old Testament. Chicago: Moody Press.)