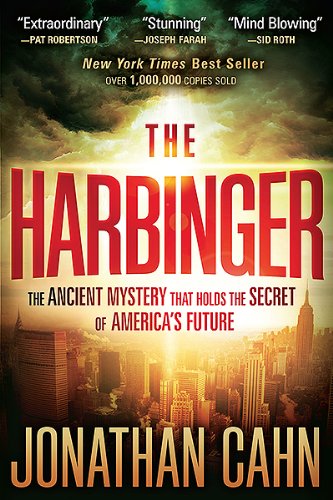 – The Harbinger [1] is a fictional account of what its author, Messianic Rabbi Jonathan Cahn believes is a scenario that is on the verge of happening to America, unless there is national repentance. This New York Times bestseller, though written as a work of fiction, it is clear that Cahn believes his nine harbingers are truly a pronouncement of impending judgment against the United States. At the beginning of the book it says, “What you are about to read is presented in the form of a story, but what is contained within the story is real.” If this was not clear from the book, it is made very clear when one views any number of the one-hour presentations of this material by Cahn on the internet’s YouTube. There is even a two-hour DVD movie entitled: The Isaiah 9:10 Judgment [2] with Cahn. The question that any Bible-believing Christian should ask about The Harbinger is as follows: “Is this really a true message or revelation from God?”

IS AMERICA A COVENANT NATION?

Rabbi Cahn begins his presentation by saying that there are only two nations in the history of the world who are in covenant relation with God. They are Israel and America. Israel is clearly in a direct covenant relationship with God . . . but America? “But there was one other—a civilization also conceived and dedicated to the will of God from its conception . . . America.” Cahn continues, “Those who laid America’s foundations saw it as a new Israel, an Israel of the New World. And as with ancient Israel, they saw it as in covenant with God.” [3]

Amazingly, the Jewish Christian Rabbi, Jonathan Cahn is advocating a form of replacement theology by presenting America as “a new Israel.” Israel and Israel alone is the Lord’s only covenant nation. While there are a number of biblical passages that make it clear that the twelve tribes of Israel are God’s lone covenant nation (Ex. 20:2; 34:27; Deut. 4:1, 6–8, 13, 20, 34, 37, 44; 7:6–8; 1 Kings 8:9), Psalm 147:19–20 says, “He declares His words to Jacob, His statutes and His ordinances to Israel. He has not dealt thus with any nation; and as for His ordinances, they have not known them. Praise the LORD!” Only once in history did God choose to make a covenant with a nation and it was Israel.

If Cahn somehow thinks that America is a covenant nation with God because our founders primarily during the Colonial Period were devout Christians, which they were, that does not mean that God recognizes such nations as being in a covenantal relationship like Israel. Things like the Mayflower Compact were not made with God but horizontally between the Pilgrims to honor God and do other things. No doubt, the 167 years of Colonial America provided perhaps the greatest Christian basis for any nation in history, but somehow making our country a “covenant nation” like Israel simply could not and did not happen.

Cahn compounds his error by citing 2 Chronicles 7:14 (one of the most abused verses in the Bible) as God’s message to America for today in one of the closing chapters. “And My people who are called by My name humble themselves and pray, and seek My face and turn from their wicked ways, then I will hear from heaven, will forgive their sin, and will heal their land.” Cahn applies this passage to America, not Israel as in the biblical context when he says: “It’s the call of God to a nation once dedicated to His purposes but now falling away from His will. It’s the call of God to return.” [4] Only Israel is called by the Lord’s name. In the surrounding context of this passage the phrase “Thy people Israel” is used seven times in chapters six and seven in 2 Chronicles. The Lord declares, “but I have chosen Jerusalem that My name might be there and I have chosen David to be over My people Israel” (6:6). You don’t volunteer to be God’s chosen people, He must choose you and He has only chosen the nation of Israel!

What bothers me the most about this book is that Cahn, who appears to be a strongly committed Christian and zealous in his work for the Lord, is not zealous to protect and rightly handle the Scriptures. How can anyone take a passage that is clearly addressed to Israel (Isa. 9:10) and one that has already been fulfilled in history for Israel and say that it also applies in some way to America? There is only a single meaning to any passage in the entire canon of Scripture. Yet, Rabbi Cahn claims that Isaiah 9:10 also is a prophecy about contemporary America. He admits that it was fulfilled in the past in relation to the Northern Kingdom by the invasion of the Assyrians. [5] But it is also a prophecy relating to contemporary America as a mystery that needs to be uncovered. Cahn claims that when the mystery is unraveled, the same pattern of judgment that happened two and a half thousand years ago will be repeated upon America. “The Nine Harbingers that manifested in ancient Israel in the nation’s last days,” explains Cahn, “Each one was a sign. Each one was a warning of judgment . . . of their end . . . the Nine Harbingers of judgment.” [6]

For Cahn, these nine harbingers are something he says is revealed to be for America. [7] Thus, he is under the delusion that some kind of revelation from God to him has taken place via the warnings of American judgment. Yet, it is somehow linked with Isaiah 9:10 and a series of interesting events that have taken place in conjunction with the attack on the Twin Towers in New York City during 9/11 and various events and statements by important people since that event.. Since America was called to be “a vessel of redemption, an instrument of God’s purposes, a light to the world,” [8] and was no longer performing that role, God is giving her a warning of impending judgment upon our nation in the form of the nine harbingers of Isaiah 9:10.

The first is a breach in the wall, which means that at 9/11 America’s divine protection no longer was in place. [9] Second, the terrorist represents America invading Iraq that was in ancient times the location of Assyria that invaded Israel in the eight century B.C. [10] Third, the fallen bricks speak of the nation not repenting, but becoming arrogant and saying they will build the ruins back stronger and better than at the first. [11] Fourth, the tower represents the leaders not repenting and desiring to rebuild the towers even higher than before. [12] Fifth, the Gazit Stone tells of the foundations and the huge “Freedom Stone” at Ground Zero. [13] Sixth, the sycamore tree is symbolic of the uprooting of the nation through judgment. [14] Seventh, the Erez tree is a tree of hope and pictures a stubborn nation’s failure to repent and turn to God. [15] Eight, the utterance of actual judgment upon America. [16] Ninth, the prophecy of judgment reiterated upon America, but she can repent if she heeds the warning of 2 Chronicles 7:14.17.

Many American Christians are falling for the message found in The Harbinger as if Isaiah himself had been resurrected and came to America and spoke it himself. Many might say, “What could be wrong with a message from any source telling America to repent?” Surely a majority of Americans do need to repent, but if we believe it on the basis of someone claiming to speak on an authority equal with the Bible, then we have fallen for a false authority. Besides, Paul has already told America and every human on the planet to repent in Acts 17:30–31. “Therefore having overlooked the times of ignorance, God is now declaring to men that all everywhere should repent, because He has fixed a day in which He will judge the world in righteousness through a Man whom He has appointed, having furnished proof to all men by raising Him from the dead.”

Many are talking today about God judging America and He surely could do that in a dramatic way, but the focus of Paul, even two thousand years ago was on the fact that God has already fixed a day on His calendar when He will judge the world for unbelief. Yes, America is deserving of judgment but so is the entire world. Could anyone name a nation in the world today that does not deserve God’s judgment? I cannot and I doubt that you can name one either. Bible prophecy appears to indicate that this world is moving toward global judgment where America and all the Christ-rejecting nations will join the Antichrist’s team in revolt against our Lord God Almighty, whom Christ will destroy with the breath of His mouth at the second coming when He will set up a righteous rule through His redeemed people Israel. Maranatha!