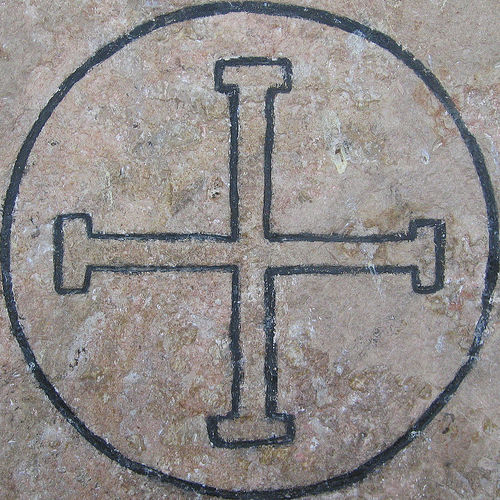 – In this post I want to share an interesting insight that I gained in preparation for teaching the book of Hebrews. Since the question as to whether salvation is something permanent or something that can be lost is always a major topic it is something that I always address when I come across a passage that has a point to make concerning it. In my opinion one such passage is Hebrews 1:3, in particular when the writer states, “and (Christ) upholds all things by the word of His power.”What we must first address is the fact that this phrase is preceded by the statement that He is the one “through whom also He (God the Father) made the world” (v.2). In this verse is seen the fact that Christ is the one through whom God created (Greek poieo – to produce a product) the ages of time (Greek aionas – ages, translated as world in some cases). The emphasis being that not only did He create the universe and space, but the broader idea includes those plus all of time, i.e., time itself and the periods of history from beginning to end. As part of that creation, or better said, that creative act is part of His divine plan and Christ is the one through whom the plan of God has been enacted.

In addition to creating all things now we see that He also upholds all things. The Greek word can be mean that He is the sustainer of all things, or that He maintains all things. The word introduces the idea that all that He has created (time, space, history, the material universe, etc.) is being held together by Him. Paul addressed this in Colossians 1:17b, “and in Him all things hold together.” Can anyone say “Laminin”? However, it goes even beyond just holding all creation together, as if that weren’t enough. Dr. J. Dwight Pentecost points out that the word “has in it the idea of carrying something along to a designated end” (Faith That Endures, 48). Simply stated, God’s divine plan has been created by Christ and is being carried to completion by Christ.

That being the case there are major implications for those who believe. First, God’s Divine Plan will be carried out to the fullest degree just as He designed for it to be. This is true within itself, but also because of the second implication, which is that Christ is actively involved in His creation and in carrying out the Divine Plan of God. Third, as part of His divine plan, Paul states that God “chose us in (Christ) before the foundation of the world” having “predestined us to adoption as sons through Christ to Himself” and that “we have obtained an inheritance, having been predestined according to His purposes” (Eph. 1:4,5,11). In conjunction with this Paul also tells us, “For those whom He foreknew, He also predestined to become conformed to the image of His Son, . . . and these whom He predestined, He also called; and these whom He called, He also justified; and these whom He justified, He also glorified” (Rom. 8:29-30).

If we put these three implications together we find that Christ, having produced the ages of time in which the Divine Plan of God is working, is actively seeing to it that the Father’s plan is carried out to completion. As part of that plan the Father has chosen to save those whom He foreknew. Therefore, Christ is actively saving those whom the Father has called and actively moving that salvation on to its intended end. Because of this we can echo Paul’s words, “I am not ashamed; for I know whom I have believed and I am convinced that He is able to guard what I have entrusted to Him until that day” (2 Tim. 1:12). Or we can run to the words of the writer of Hebrews found in 7:25; “Therefore He is able also to save forever those who draw near to God through Him, since He always lives to make intercession for them.”

Time and time again God reminds us that the work of our salvation is complete in Christ. The writer of Hebrews begins his letter with the profound statement that Jesus the Messiah is in the process of carrying out God’s Divine Plan, including the salvation of His chosen, to its fullest extent. We do not work for our salvation. It is a gift. We do not work to keep our salvation.  It is an eternal, everlasting gift. We have assurance of that because Jesus Christ is actively carrying God’s Divine Plan out to its intended end.

Rest in Him my friends. I pray this helps.